One of the most common reasons for people to get laser hair removal in Edmonton. Is to eliminate hair that people consider embarrassing. Whether it is unsightly. Or in a place that makes people self-conscious. 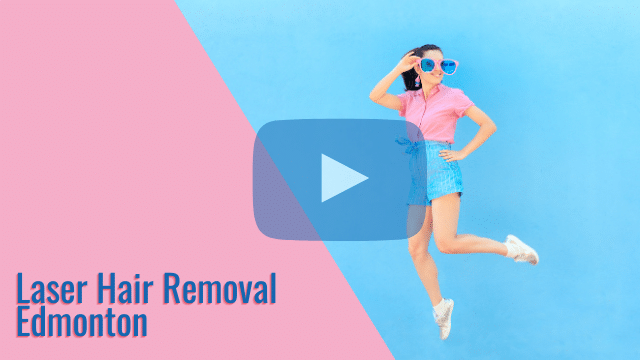 Laser hair removal in Edmonton is growing in popularity. Year after year. Not only because it is quick, and virtually painless. But also, because of how effective it is. It can get rid of 90% of unwanted hair.
For the rest of a person’s life. As long as they follow the before and after care instructions. From there dermatologist. For a lot of people, staying on top of their embarrassing hair. Takes a lot of their time and energy.
Allowing them to stop worrying. Once they have finished all of their laser sessions. Whether it is hair on their face, there. Their arms and hands. Or even their legs and feet. The laser used to remove unwanted hair.
Can treat virtually any part of the body. With one exception, people’s eyebrows. The reason why dermatologists and laser technicians. Cannot do laser treatment on their eyebrows.
Is simply because the handpiece. It used to deliver the laser pulses is extremely large. And they would not be able to get any type of precision around this delicate area of their body.
As well as getting rid of embarrassing and unsightly hair. Laser hair removal in Edmonton. Can also get rid of hair that is unseen. Such as under arms, legs and bikinis own.

The first step to getting this treatment is setting up an initial consultation with their dermatologist. They will be able to find out if they have easy to treat hair. Or if there hair is considered stubborn.
For example, the darker they hair is. The easier the laser can target the hair. Since it actually searches out the pigmentation. In the hair follicle itself. Therefore, lighter coloured hair.
Is usually considered more difficult to treat. And may require multiple applications. In order to ensure. The laser has hit every hair follicle. To destroy it, and eliminate the hair in that area.
As well, dermatologists say extra thick hair. Is also more stubborn to treat. Because the hair is more likely to grow back more often. Requiring multiple sessions. To destroy the hair follicles. And thin the hair.
For it to become destroyed permanently. As well, the part of the body that they are getting laser hair removal on. Will factor into how many treatments they need. This is because the vascularity of the area.
Will determine how stubborn hair is at getting eliminated. The more vascular the area, such as the legs. The more stubborn the hair will be. And more treatments will be required.
This is why it is very important. For all patients to meet with their Edmonton dermatologist. So that they can find out approximately how many treatments they need. So that they can be satisfied with the results of their treatment.

Many people think women are typically the ones getting laser hair removal in Edmonton. However, dermatologists say it is even, the number of women and men. That get this cosmetic procedure.
And while the laser can treat virtually any part of the body. The areas that men get treated are different. Then the areas that women are more likely to get treated. For example, many men.
Want to get either the nape of their neck Treated. Because they can end up with unsightly and embarrassing hair. That creeps down from their hairline. Causing them to be self-conscious.
They frequently get their barber to tidy up that area. But the hair grows back faster. Then they go to the barber. Causing them frustration, and embarrassment. Especially because it is difficult for them.
To shave that area of the body themselves. Therefore, they come into the dermatologists office. Wondering if that is something that they can get taken care of permanently.
As well, they do not necessarily. Want to get there facial hair eliminated permanently. But there beard hair, can creep out down their neck. Or up on their cheeks. Causing them embarrassment.
As well as being time-consuming to take care of on a regular basis. Therefore, they would like nothing more. Then to get laser hair removal in Edmonton. To eliminate those problem hairs. In a permanent way.

As well, men often like getting their chest or back done. Because one of the best things about this. Is once the laser sessions are done. They will never again, have to deal with stubble on their chest.
That not only is unattractive to look at. But it feels odd. And makes them feel more self-conscious. Many men often say that they would not even shave their chest or back.
Preferring a more permanent method, in order to get rid of that hair. However, dermatologists also see men getting their legs treated. Especially if they are quite hairy. Or if they are an athlete.
Such as a bodybuilder, or swimmer. As well, men get their arms, feet and bikini areas treated as well. While women can get almost every area of their body treated as well. They typically get their upper lip.
There under arms, legs and bikini area treated. Some women, especially after they hit menopause. Want to get their chin treated. While this is possible. Dermatologists caution patients before this procedure.
The reason why women typically get chin hair. Is because of the hormonal imbalance. That causes testosterone to increase in their body. Women who are going through menopause for example will have increased testosterone.
Or if women have a specific hormone imbalance. Such as polycystic ovarian syndrome. That causes hormone levels to surge. Will also have an hair. And while they can get laser hair removal in Edmonton done.
This is not going to be as permanent. Because the continued increase of testosterone in their body. Will continue to grow new hairs. Requiring women to come back for multiple treatments. Once every three years or so.